Established on the 29th of November, 1852, the Melbourne Unitarian Church is one of the oldest religious organisations in Victoria.   The Church was established at a meeting in what is now the Athenaeum Theatre. The first Chief

The Church was established at a meeting in what is now the Athenaeum Theatre. The first Chief Justice of Victoria Sir William a’Beckett chaired.

There is some relevant prior history. For example, it is very fitting that the first recorded Unitarian on Australian soil was not a member of the establishment, but rather a convict. The Reverand Thomas Fysche Palmer, was sentenced to writing “seditious and inflammatory writing”, specifically a tract against the corrupt property franchises in elections to the House of Commons, and was sent to Botany Bay arriving in 1794. Rev. Palmer died in a Spanish prison, accused of being a British spy, in Guam in 1802 after having completed his sentence and attempting to return to England.

The next Unitarian minister to visit Australia was the Reverend Maxell Davidson in 1851, being the first Minister to arrive in Melbourne. This was a fortuitous time, as public concern over the lack of church attendance (only 1 in 8), led to hefty public financing of places of Christian worship, which was aided by the influx of immigration resulting from the gold rush and the prosperity that brought.

The first church meeting was held at the home of James Duerdin and was attended by ten others, including the Rev. Davidson and the first chief justice of Victoria, Sir William a’Beckett, who took up the role as committee chair. The first service was held at the Mechanics Institute (later the Athaneum Theatre) on January 30, 1853 which was attended by some 40 to 50 families with a sermon entitled “On the Unity of God”. Setting a precedent that would follow for the Church’s history, Rev. Davidson espoused not only the importance of the involvement of Unitarians in community development, but also the necessity for a religion to be rational, lest the situation arise that all social institutions and structures become irrational.

If the great leading article of a creed be a contradiction of the intellect, or understand, or reason, then the whole religious system must be supported by contradictions and absurdities… if a nation’s faith be superstitious and irrational,and they sincerely believe it, then all the laws and customs, and institutions will, in some degree, be tinged with irrationality.

With the establishment of a building fund which included support by two parliamentarians (Archibald Michie and William Nicholson), the aforementioned chief justice William a’Beckett, and a natural scientist, Dr. Godfrey Howitt, and provision of allotments from the Colonial Secretary, the Melbourne Unitarian Church’s foundation stone was laid on July 1853, in what was then Grey Street West, now Cathedral Place. The building was striking, to say the least; whereas other Christian churchs in Melbourne were in a traditional style of peaked roof and spire, the Melbourne Unitarian Church had a thoroughly Hellenic pagan presentation, complete with ionic columns!

In comparison to his congregation however, Rev. Davidson was considered somewhat theologically and socially conservative. Indeed, in correspondence he complained that several families calling themselves “Unitarian” were probably “deistical or infidel”, along with a number of atheists. The establishment of “renting” seats in the church and reserving them for men, was controversial although common among Anglican Church’s as well. He clashed with the Church committee of management for refusing a visiting clergyman the pulpit as he had a reputation for socialistic views. In 1857, faced with ill-health and a dissenting congregation, Rev. Davidson resigned and returned to England.

By the time that Unitarianism was established in Victoria, the bloody discrimination against Unitarians had ceased (see: UU History). Indeed, the government of Victoria was doing its best to promote Christian worship by the awarding of funds according to the number of adherents to each denomination. There were unsuccessful attempts to extend this funding to Jews and Non-Conformists without success. The Unitarian lay preacher, Charles Bright was particularly critical of state aid to churches on the grounds of the discrimination against Jews.

Discrimination did exist however. In South Australia a similar fund existed and there were moves to exclude the Unitarians there on the grounds that they were not Christian (along with Jews and Chinese). Rev. Davidson’s wife, having established a boarding school in the Melbourne suburbs, found her pupils withdrawn from the school upon her marriage to the Unitarian minister. In 1858 when Rev. William Bowen, the new Unitarian minister following Rev. Davidson, leased some land from the Presbyterian Church in the suburbs, the latter Church enforced a “purification” ritual on the sacred ground once the heresy of Unitarian preaching had been discovered.

In the 1860s, under Rev. Henry Higginson, the name of the Church was altered from the “Melbourne Unitarian Congregation” to the “Melbourne Unitarian Christian Church”. This name-change was challenged by an anonymous correspondent in The Weekly Times who questioned the right of Unitarians to call themselves Christian when they denied the divinity of Christ. An anonymous respondant offered 50 guineas if they could find in the Bible “that other Popish God”, “God the Holy Ghost”. Mention must also be made at this this point at the establishment and operation of a Ballarat Unitarian congregation which lasted for four years from 1857 to 1861.

The Melbourne church also has the honour of having ordained the first woman minister in what was the (then) British Empire. Martha Turner was elected by the congregation on 26 Oct 1873.

Whilst the 1870s were a quiet period under the careful ministry of Rev. Martha Turner, the 1880s and 1890s witnessed a great conflict between secularists and conservative religious forces in Victoria. Controversial debates arose over the theories of Charles Darwin on evolution, an article by the popular Presbyterian liberal Rev. Dr. Charles Strong on the validity of miracles in the quality journal, the Victorian Review, and the conflict between those who felt that Melbourne’s museum, library and gallery should be open on a Sunday and those who felt that the day could only be reserved for religious purposes. A petition collected by the former group (the Sunday Liberation Society) achieved 30,000 signatories whereas their opponents (the Sunday Observance League) mustered 11,000. 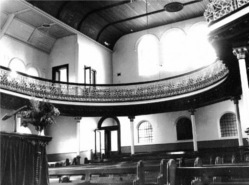 In all these debates the Unitarians were the most progressive thinkers and closest to the secular demands. Whilst this resulted in the Church having a remarkable upsurge in membership, necessitating a new building in 1887, the Minister of the Church, George Walters, remarked on the isolation of the Unitarians from their Christian brethren. Indeed, the Unitarian church was subject to some savage criticism at this time, even from more liberal faiths such as the Wesleyans and Methodists and especially after some comments of praise from the chief justice, George Higinbotham.

During much its foundation years the finances of the Church were carefully managed by one Henry Gyles Turner, who so happened to be the general manager of the Commercial Bank in the 1870s. This proved to be useful as in the 1890s, Australia was struck by the depression. Interest in religious controversy declined sharly as people became extremely attentive of material interests. Whilst on the one hand, this provided the opportunity to mend fences with the increasingly liberal mainstream Protestant churches. Along with a regular exchange of pulpits with organisations such as the Australian Church, a regular attendee was a rabbi representing Melbourne’s Liberal Jews, and the Progressive Spiritualists.